Group insurance: what are the tax benefits? - AG Employee Benefits
*

Group insurance: a tax-efficient solution for you and your staff members

As an employer, you're probably on the lookout for ways to thank your staff members for their contribution and engagement. One of the solutions we have at AG is to boost the attractiveness of your remuneration policy by including group insurance as a fringe benefit. A great way to supersize the nest egg your staff members will collect when they retire. Check out our analysis below.​

​
With rumours about future pension reforms still going strong and the as yet-unknown impact on employers and their staff members, group insurance remains a safe bet in terms of tax implications. In an exclusive interview for AG, Minister of Pensions Karine Lalieux confirmed that "There is no link whatsoever between raising the minimum pension and reforming the second pillar pension system. I can assure you that one will not be financed by the other."

When your staff members retire, they immediately lose their job-related perks such as their company car. And it's no secret to any of us that the size of the state pension for salaried employees is too small to cover these costs and other financial needs. And even if Minister Lalieux has promised an increase in the first pension pillar, no one can be sure that the state pension will cover essential living expenses - such as medical care or a nursing home - or that there will be enough left over for discretionary spending such as entertainment, hobbies, travel or the purchase of a second home.

As an employer, you can make a difference and give your staff members' pension pot a boost. With AG, you can set up a pension plan for your staff members in the form of group insurance. This way, they can build up a cash reserve that will help carry them through retirement. Think of it as a fair reward after years of loyal service.

Group insurance is a financially attractive solution for you and your staff members. This is because of the more favourable tax treatment of supplementary pensions. The result? Far more cash in hand upon retirement than with an ordinary pay raise, which hardly increase the size of the state pension at all. First of all, it's important to know that for group insurance, the employer's NSSO contributions, taxes and other personal expenses for staff members are much lower than for straight "cash" payments. The infographic below is particularly revealing on the subject. 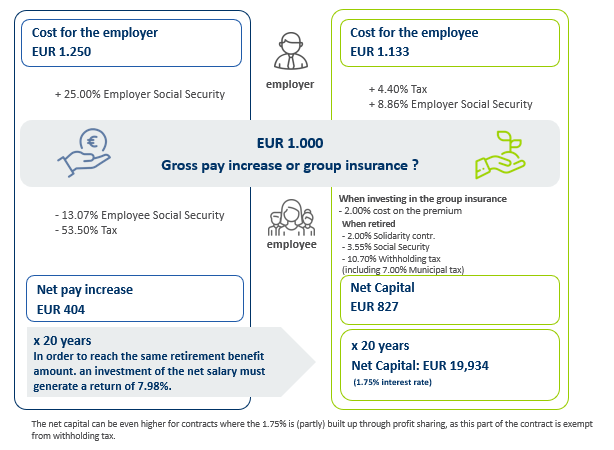 In the example above, €1,000 invested in a gross pay raise for a staff member costs the company €1,250 after factoring in employer contributions. After taxes and other mandatory deductions, the net take-home pay for your staff member is only €404.

Imagine a staff member who works for you for 20 years. If s/he wants to reach the same net amount payable when the group insurance reaches maturity, s/he'll need to invest the amount received in cash in a product with an average return of 7.98%. And keep in mind that if the plan includes profit sharing, the part of the savings that accrue through this component will be exempt from withholding tax, which means even more cash in hand.

In short, if you set up a group insurance plan for your staff members, you'll be thanking them for their engagement with a sizeable nest egg - an added sweetener on top of their state pension - for them to collect when they retire. And from your perspective, you'll get the benefit of lower employer contributions. Group insurance is clearly a win-win opportunity that comes with attractive tax benefits for you and your staff members.

To recap, group insurance is tax-efficient because:​

All details about taxation of your group insurance​